What is an MRE?

By Jeff and Amy Davis
4 comments
More from this author 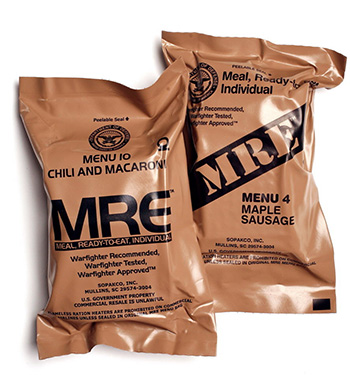 Brief History of MREs
These meal packets were designed to address the growing need for quick and easy meals in military situations. The MREs are the most recent in a long line of ways the U.S. Military has fed its soldiers in the field, replacing the more recent MCIs (Meal, Combat, Individual rations) and the LRPs (Long Range Patrol ration).

For a more in-depth look at how MREs work, consult our articles “The Science Behind MREs” (which contains an exclusive interview with the Director of the Department of Defenses’ Combat Feeding Program).

Different Types of MREs
There are currently a wide variety of MRE meals and entrees available. Over the years the menus behind MREs have greatly expanded to an existing selection to more than two dozen meals, currently including Mediterranean chicken, spicy penne pasta, and vegetable lasagna.

• Individual Entrées – At the centerpiece of every MRE is an entrée of some kind, usually meat and grain based (though in recent years vegetarian MREs have become available). Popular variations of MRE entrees include sandwiches, pastas, and stews. These individual entrees can be purchased individually (usually somewhere between $2.50-$5.50 an entrée) or in bulk.

• Snacks and Drinks – Sometimes all you really need (or want) is something sweet or salty. The MRE snacks and drinks were provided to meet this need with a variety of cookies, turnovers, pound cakes and brownies. Nut and raisin mixes (with and without M&Ms) are also popular, along with baked snack crackers, dried fruit and filled pretzels. The drinks in MREs are typically small powder packs to be mixed in with water to create fruit drinks with nutritive sweeteners or carbohydrate electrolytes. Pricing for a single MRE snack ranges from $2-$4, depending on the complexity of the snack. Again, they can be purchased individually or in bulk.

• Full Meal – The military makes small changes and alterations year-to-year with what they include in MREs, but typically a full MRE contains the following: The entre, a side dish (rice, fruit or corn), hot sauce or seasoning, crackers or bread along with a spread (jelly, cheese or peanut butter), candy, beverage mix, dessert, flameless ration heater, and additional accessories (spoon, chewing gum, toilet paper, etc.). The nutritional value of a single MRE is equal to a third of the military recommend daily allowance of vitamins and minerals, with each containing a careful balance of protein, fat and carbohydrates. Individual meals can be purchased, but they are most often purchased in cases of 12 or 24 full meals.

We’re interested. Have you used MREs before? What did you think of them? Would you continue to use them? Comment below and tell us your thoughts.

8 years ago
Print
Comments
Diana
I forgot to add, those MRE flameless ration heaters can be used with any food in a heat-proof retort pouch. It might make sense to purchase a few of those for your bugout bag; just use them to reheat better tasting and better-for-you foods than MREs.
Reply
Mike B.
MRE's are good when there is nothing else to eat. From my experience, the entree usually taste pretty bland. The vacuum packed cookies & snacks are pretty good tasting. We received several cases of MREs after hurricane Katrina.
Reply
Reid
when MRE's came out we joked that, war wasn't hell enough ,they had to add MRE's . We were used to C-Rations and actually had come to like them. (LOL)
Reply
stumpy
I use MRE's while hunting. They taste great. I think they are better tasting now than they were back in the 1980's. There are also more entree variety now. My young son and nephew also enjoy MRE's while hunting. They think its cool to have a full meal without having to walk back home. I also take them along on day trips of fishing and hiking.
Reply
Search The Blog
Categories