By Jeff and Amy Davis
58 comments
More from this author

Hydrogen peroxide can be a great tool in your emergency pack. It has hundreds of uses that can help you clean and disinfect in any situation. Today, we will be discussing how you can use it in an emergency and around the house.

Hydrogen peroxide has the chemical property of

It is a strong oxidizer and is often used as a bleach or cleaning agent. You can also use it to whiten clothes, fight infections, make your own toothpaste, etc. Check out these ideas below on how you can use hydrogen peroxide for multiple purposes around your home. 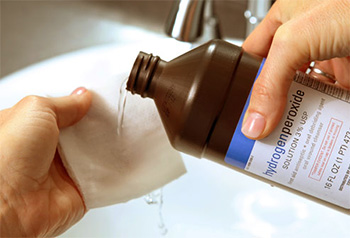 , you have a few different options. Hydrogen peroxide comes in a few different grades, the most common being 3.5% Pharmaceutical grade. This is sold in your local drug stores and supermarket and should not be ingested.

6% grade is used in beauty shops to color hair and shouldn't be used internally. Higher grades like 30-32% are used to clean electronics and cars.

3.5% grade is the only grade that is approved for internal use. It's used in the production of eggs, cheese and other food items.

The only other grade higher than 35% is 90% and is used as an oxygen source for rocket fuel! Ya, don't eat that either.

Remember that using items over again and finding multiple uses is a great way to save money and help you become more self-reliant and self-sufficient.

Whiten Clothes
Add a cup of peroxide to your laundry as they wash. It gets rid of stains in clothes and carpet. Just pour directly onto the spot, let it sit for a few minutes and then rub and rinse with cold water. Repeat if necessary.

Infected Cuts
Soak the cut in a mixture of 3-5% hydrogen peroxide for five to 10 minutes several times a day. People have reported that soaking their wounds in hydrogen peroxide has healed gangrene, boils, and skin infections.

Sinus Infections
A tablespoon of 3% hydrogen peroxide added to 1 cup of water (non-chlorinated) can be used as a nasal spray. For more severe sinus infections, increase the amount of hydrogen peroxide in the mixture.

Food Cleaner
Some people add ¼ cup hydrogen peroxide to a full sink of cold water and allow their vegetables to soak and clean before preparation. You can also rinse your meat off before cooking.

Clean Mold
Use a hydrogen peroxide spray to wipe up mold in the fridge or in your house so that it doesn’t spread. Since hydrogen peroxide is anti-fungal and antibacterial, it should stop the mold in its tracks!

Your Ideas?
What have you used hydrogen peroxide

for? Comment below and tell us what you’ve used the miracle liquid for and any other suggestions for sanitation and hygiene.